XStreamForce SARMs – YK11 is quite possibly one of the most powerful SARMs on the market today, due to its unique nature as both a SARM and a myostatin inhibitor. Not only is YK11 a SARM, which will help promote lean muscle growth, but it also inhibits myostatin, which unlocks your natural bodybuilding potential.

What is YK-11? Is it safe for health? What effects can you expect from using this product? What should you know before you buy? Find answers to these and other questions in the following article.

YK11 belongs to a class of research chemicals known as SARMS, which were initially developed to help treat muscle wasting in cancer patients. Selective androgen receptor modulators, or SARMs for short, have potent muscle building effects, and are generally well tolerated in studies. While they were initially created to help cancer patients combat muscle wasting, bodybuilders quickly caught on, and realized that healthy individuals who took SARMs could experience steroid-like effects. While there isn’t much clinical evidence regarding YK11, anecdotal evidence suggests it’s an incredibly potent muscle building agent. In fact, as we’ll explore soon, lab rats which were given YK11 as treatment experienced absolutely mind-boggling muscle growth and results.

YK-11 is one of the newest products on the market. It’s not very popular at the moment. The main reason for this is the lack of human studies and a very small number of animal studies. For convenience, it is often included in the group of SARMs (Selective Modulators of Androgen Receptors). However, it is not SARM – just like the substances in this group, it binds to androgen receptors but does not affect them.

In reality it is a myostatin inhibitor (it reduces its activity in the body). Myostatin is a protein responsible for inhibiting muscle development by blocking the formation of new muscle fibers and reducing the rate of protein synthesis. The amount of this protein in our bodies not only determines our genetic limit, but also affects the rate of muscle regeneration.

While there are minimal YK11 studies regarding the effects on humans, we do know that this SARM has an extremely anabolic effect on animals. In fact, mice that have low levels of myostatin, which is what YK11 inhibits, have on average twice as much muscle mass as rats who don’t.

Here are some reported benefits of YK11 usage:

The biggest benefit of YK11 is the rapid muscle growth, as users often report gaining 10-15 pounds or more from one 12-week cycle of YK11.

While the long-term health effects of YK11 haven’t been studied in humans, there is evidence to suggest it’s an incredibly potent anabolic drug.

In fact, much of the anecdotal data and various logs of body builders and their experiences suggest that YK11 is comparable to a mild steroid cycle.

While the drug hasn’t been approved for human use by the FDA, you can be sure that body builders are using it to get jacked all over the world.

Another reason why people love YK11 is that it creates a muscle hardening effect that few other supplements on the market can manage.

In addition to the rapid muscle growth that will come from this compound, YK11 is also known for creating the “cut and dry” look that lifters love.

What’s more is that if you combine YK11 with SR9009 or GW1516 SARM meant for cutting, you could experience VERY fast and lean gains.

Most people take this compound, because of its ability to rapidly increase strength in users. In fact, one study conducted at the Department of Internal Medicine at Yale University, found that treating mice with an anti-myostatin drug for just 4 weeks was associated with a huge increase in muscle strength.

While more studies certainly need to be done on this compound, preliminary data and anecdotal evidence suggests that it’s an EXTREMELY potent muscle building compound, rivaling even the strongest of anabolic steroids.

Because there have been no human trials with YK11 treatment, there is no medically established dose of YK11 for human use to date. However, the general consensus amongst bodybuilders is that 10 mg is a good dosage for muscle growth and performance enhancement.

Here are the YK11 dosage guidelines:

While some users have reported taking dosages as high as 30mg/day, most agree that taking between 10 mg and 15 mg to start is best. 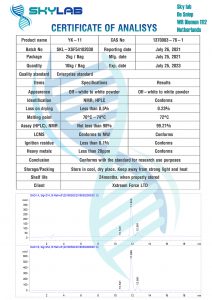