MK-677 (also known as Ibutamoren), promotes the secretion of the growth hormone (GH) and increases insulin-like growth factor 1 (IGF-1). Ibutamoren increases growth hormone levels by mimicking the action of the hormone ghrelin and binding to one of the ghrelin receptors (GHSR) in the brain. Activated GHSR stimulates growth hormone release from the brain. Clinical studies describe only the effects ibutamoren has on appetite and as expected, like ghrelin, Ibutamoren increases it. GHSR is found in brain regions that control appetite, pleasure, mood, biological rhythms, memory, and cognition. Therefore, we can expect that ibutamoren may also affect these functions. It increases growth hormone levels with little or no increase in other hormones, such as cortisol. Cortisol suppresses the immune system, reduces wound healing, and impairs learning and memory, and it’s usually not good to have this hormone elevated.

Therefore, we can expect that Ibutamoren may also affect these functions. It increases growth hormone levels with little or no increase in other hormones, such as cortisol. Cortisol suppresses the immune system, reduces wound healing, and impairs learning and memory, and it’s usually not good to have this hormone elevated.

But What actually is MK-677? What effects can you expect from its use? Does it have any side effects? What should you consider before buying? We answer these and other questions in the following article.

Ibutamoren, also known as MK-677 and Nutrobal, is a substance developed by Merck & Co. in the early 21st century. Often wrongly categorized as SARMs (Selective Modulators of Androgen Receptors) or referred to as growth hormone in pills/liquid. Ibutamoren MK-677 liquid is a substance that stimulates the secretion of growth hormone and insulin-like growth factor IGF-1. This means that Ibutamoren does not directly affect the levels of these hormones, but only indirectly signals the body to produce more of them. It binds to the GHSR receptors and thus also affects all related functions – appetite, mood, memory, biological rhythm and cognitive ability. Ibutamoren is currently being studied for its ability to prevent muscle wasting and obesity-related diseases, increase bone density, and serve as a remedy for hormone deficiencies. Recent clinical trial results confirm reviews of people who have used MK-677 to date and prove that the high hopes placed in this substance were not unfounded.

MK 677 is used because it has been scientifically shown to increase growth hormone (GH) and insulin-like growth factor (IGF1). Both GH and IGF1 are crucial hormones that, when increased, lead to numerous benefits; here’s a breakdown of what to expect.

Growth hormone helps with repairing muscle tissue and other cells. It also impacts the skin, metabolism, and fat loss. When GH is increased, it is going to accelerate these processes. As an athlete, that’s going to have significant benefits. You’ll recover faster, which allows you to handle more workload during exercise. According to users that have experimented with this compound, it takes several weeks to notice this effect.

As previously mentioned, MK 677 is said to boost GH and IGF-1. Both these hormones play a role in muscle growth, meaning you’re going to notice an increase in fat free mass. Primarily growth hormone has shown to increase muscle mass and strength, making it useful for athletes. The muscle-building capabilities of Ibutamoren have also been reported in several clinical studies.

Another very noticeable benefit is that MK 677 increases REM sleep. In adults, Ibutamoren increased REM sleep by up to 50%. Taking this compound will significantly enhance sleep quality; many anecdotal experiences also back this. Of course, getting enough sleep and rest is crucial. It’s going to help with productivity, recovery, muscle growth, and more.

One of the most popular uses of Somatroph among gym users. Due to the secretion of growth hormone, it significantly accelerates the regeneration of all body tissues, including joints. Steroid users very often use it between cycles not only to regenerate joints that are often overloaded with anabolic steroids, but also to preserve most of the muscle gains.

Both with the use of Somatroph and growth hormones, our skin, hair and nails improve their appearance. It should be noted that this substance significantly accelerates the growth of hair and nails. Many users claim that as the cycle progresses their skin acquires a signature “glow” that they often receive compliments on. Unfortunately, this effect disappears within about a month of stopping use.

When we look at the scientific data, an MK677 dosage of 20 to 25mg per day seems to work optimally. At that dosage, it appears to be the most effective at increasing IGF-1 and GH. After going through the clinical data, we’ve also taken a look at several dozens of anecdotal experiences to see what dosage is most common. We found that it’s taken at dosages of between 10 to 30mg per day. But, the majority of the users seem to take 20 to 30mg per day. That’s when they say the effects are optimal, which is in line with the scientific data.

It’s worth mentioning that the higher the dose, the more likely one is to experience side effects.

MK-677 is typically used for cycles of 8 to 16 weeks. We see the majority aim for more extended periods of 3 to 4 months due to the effects of this compound. It’s often stacked with SARMs such as RAD140 or LGD4033 to help the user increase lean muscle mass, strength, and performance even further. If you’re going to stack Ibutamoren with SARMs, you’re going to need to stock up on a post cycle therapy to use after the cycle. In that case, we recommend getting Proviron or Clomid PCT, the most effective PCT supplements on the market. 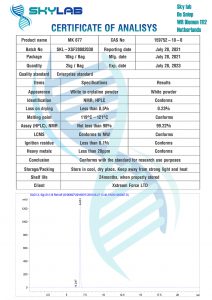