X-Stream Force SARM – S-23 is one of the newest and most potent SARMs on the market. S-23 is a product that has a strong binding affinity to Androgen Receptors in the body and therefore produces similar results to injectable anabolic. As a SARM it is the strongest SARM and as a result currently the closest available SARM to anabolic. It is non-toxic and can enable users to bulk up and drop fat which is why this product is extremely popular in the performance enhancing world.

What is S23? Is it safe for health? What results can you expect from using this product? What should you know before you buy? Find answers to these and other questions in the following article.

S23 belongs to the group of substances called SARMs (Selective Androgen Receptor Modulators). These substances are known to have a selective effect on the androgen receptors, resulting in far fewer side effects than the anabolic steroids or prohormones.

It is rumored that in recent months, a well-known pharmaceutical company – GTX – has started research on this substance. Looking at the number of possible applications, I wouldn’t be surprised if this turned out to be true.

GTX is likely interested in one particular ability of the S23 – blocking seed production. S23 could be an alternative to female contraception and The first male contraceptive method on the market.

Studies in rats show that the animals became completely infertile within a few days of starting the S23. This effect was completely reversible shortly after discontinuation of S23.

So far, studies have confirmed the S23’s ability to increase strength and accelerate the building of muscle mass without androgenic side effects. This substance also made it possible to burn adipose tissue much faster. In addition, a reduction in the size of the prostate has been observed with the use of this product, which is excellent news for people with this problem.

Because of these benefits, S23 has gained great popularity among athletes around the world in recent years. However, it should be remembered that most of the current studies have been conducted on animals and their results cannot always be extrapolated 1:1 to humans.

Cell studies on S23 have found that it can establish strong bonds with androgen receptors, making it one of the most potent SARMs around. Because of these ‘strong bonds’ you can expect to experience the following benefits:

S23 is one of the strongest SARMs currently available on the market. It allows you to build muscle and burn fat at the same time, so even if you’re in a calorie surplus, you’re more likely to experience a recomposition than the typical weight gain.
Results from rat studies show that the S23 simultaneously reduced body fat percentage and total body weight.
The scientists also gave the rats estrogens to encourage them to have sex and to see if it would cause them to lose muscle mass. Instead of the expected results, the rats given S23 gained additional muscle tissue while at the same time estrogen effects were crowded out.
Research has also shown that S23 can prevent muscle damage caused by glucocorticoids. It is a powerful anti-inflammatory drug, the chronic use of which reduces the amount of muscle tissue. SARM administration counteracted the undesirable effects of glucocorticoids by increasing muscle mass and improving strength and endurance.

The S23 researchers experience a significant improvement in strength and endurance in the first few weeks of the cycle.
Increased endurance means you can train longer and harder – which translates into better training results.
Remember that regardless of the substances used, training and diet always play a key role. SARMs or steroids are just a tool that will make it much easier for you to get the results you want.

Can serve as a male contraceptive

Research into oral contraceptives is actively being conducted around the world. S23 is one of the candidates that drug companies have been focusing on with increasing frequency in recent months.
Studies in rats show that it is able to temporarily block the hormones responsible for signaling sperm production – LH and FSH.
The current results show that the results are transient and that after stopping the drug, the production of sperm returns to baseline levels within a short period of time.
However, if you want to try it, you should pay special attention to choosing the right dosage. Studies in rats show that people who took doses much higher than normal had normal or higher than baseline sperm production.

Does not cause increased water retention

According to user reviews, S23 does not cause water residue. This means that with proper diet and PCT, you can maintain your weight 100% post cycle. In addition, increased water retention is known to have a negative impact on aesthetics – especially on the face.

Currently, this effect has only been studied in decreased libido associated with menopause. The problem is known as Hypoactive Sexual Desire Disorder (HSDD) and is usually treated with testosterone. Unfortunately, this type of therapy can have side effects, such as lowering of the voice or enlargement of the clitoris.
Unlike testosterone, S23 enhances libido with no androgenic side effects.

This substance not only increases muscle hardness, but also improves their appearance. During the cycle you can experience a dry mass effect similar to Anavar or Trenbolone. For this reason, it was often used in preparation for competitions. (Currently it is on the WADA list so it cannot be used by professionals). 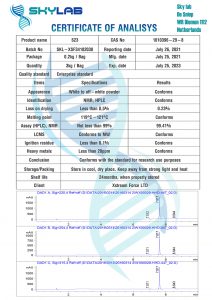